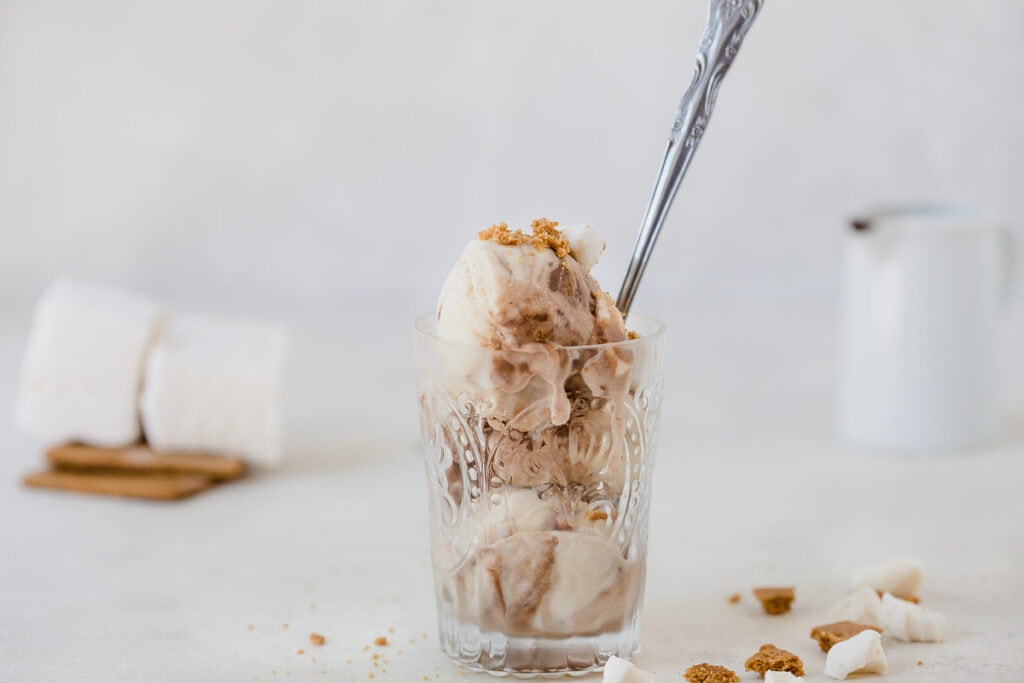 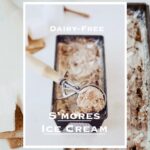 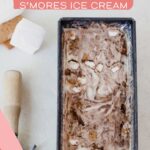 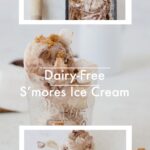 I know summer is coming to an end and school is back in session, but we are still having super hot days here! My kids are still asking for s’ mores all the time, which take a little bit more thought and having to go up to our fire pit, so this new recipe for Dairy-Free S’mores Ice Cream has been a fun activity to do together with the kids and a nice treat for the hot days.

This ice cream reminds me of the days where my siblings and I would go to our neighborhood ice cream parlour after school or dinner. We would walk into the store and have a plethora of flavors to choose from. I always loved to choose the rocky road flavor, or basically anything that had marshmallows and chocolate. After going paleo, I thought I would be confined to just the basic ice creams like vanilla and chocolate. While I still sometimes crave a big bowl of plain vanilla or chocolate paleo ice-cream, I felt like it was time to recreate those cherished ice cream parlor days from my childhood!

This recipe for S’mores Ice Cream is completely gluten-free, dairy-free, and refined sugar-free and tastes exactly like s’ mores in the form of ice cream! It is a nice treat to enjoy these last few weeks of summer or during the fall and winter months when you’re craving a taste of summer. 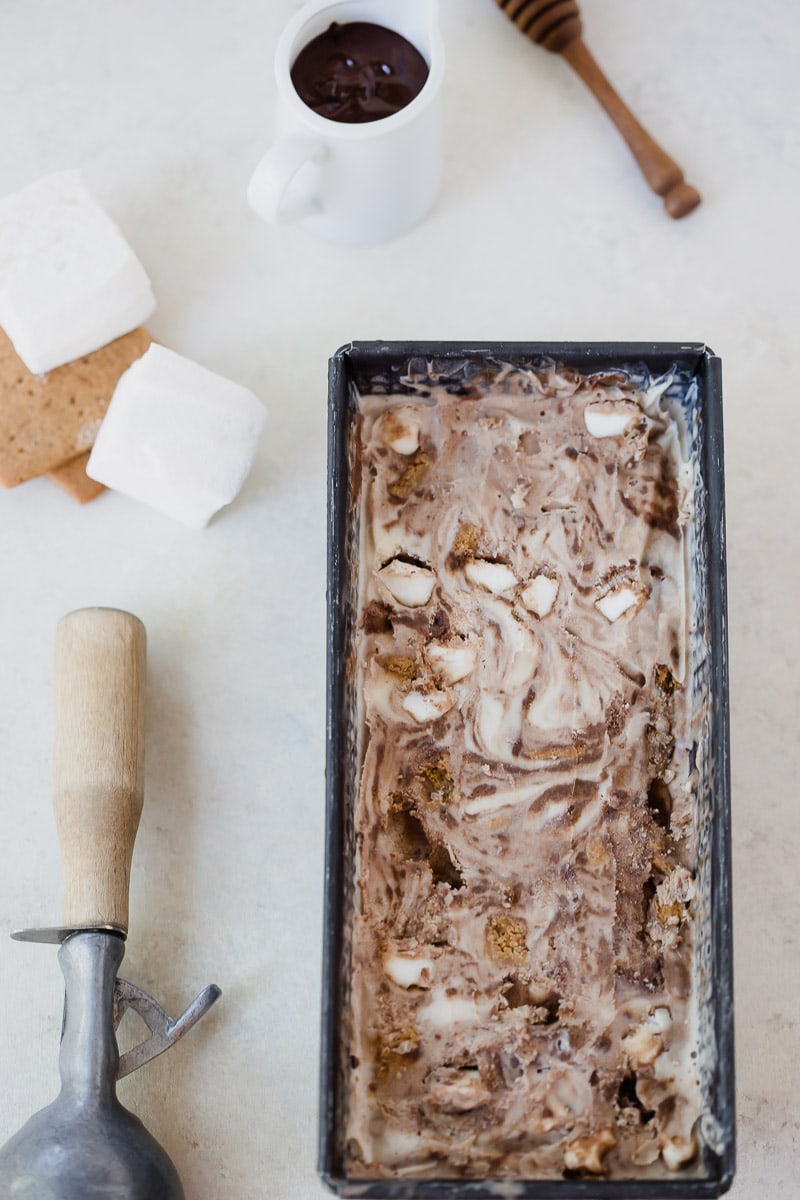 I think the most important ingredient in s’ mores are the perfectly roasted marshmallow. For this recipe, I tried to toast the marshmallows under the broiler, but sadly, they melted too quickly. They became a gooey mess that was impossible to fold into the ice cream. I also tried melting the marshmallows down into the ice cream custard mixture before churning, but it gave it a funny texture and you didn’t get that delicious surprise of gummy and chewy marshmallows throughout.

We also didn’t want to start a campfire, because who has time for that when you just want ice cream right now!? So to give this ice cream that same authentic perfectly toasted marshmallow flavor, Ryan had the idea of adding a dash of liquid smoke to the fudge swirl.

Ryan doesn’t usually have input on my recipes in the creation stage (but he’s an amazing taste-tester), so it was pretty fun to work on this one together. And let me tell you- his idea was a great one, because it gives it just the right hint of smokiness that you’d get from the campfire! I chose to mix the liquid smoke into the fudge swirl, rather than into the entire ice cream base, so you would only occasionally get a bite with the remnants of campfire smoke instead of it overwhelming every bite. 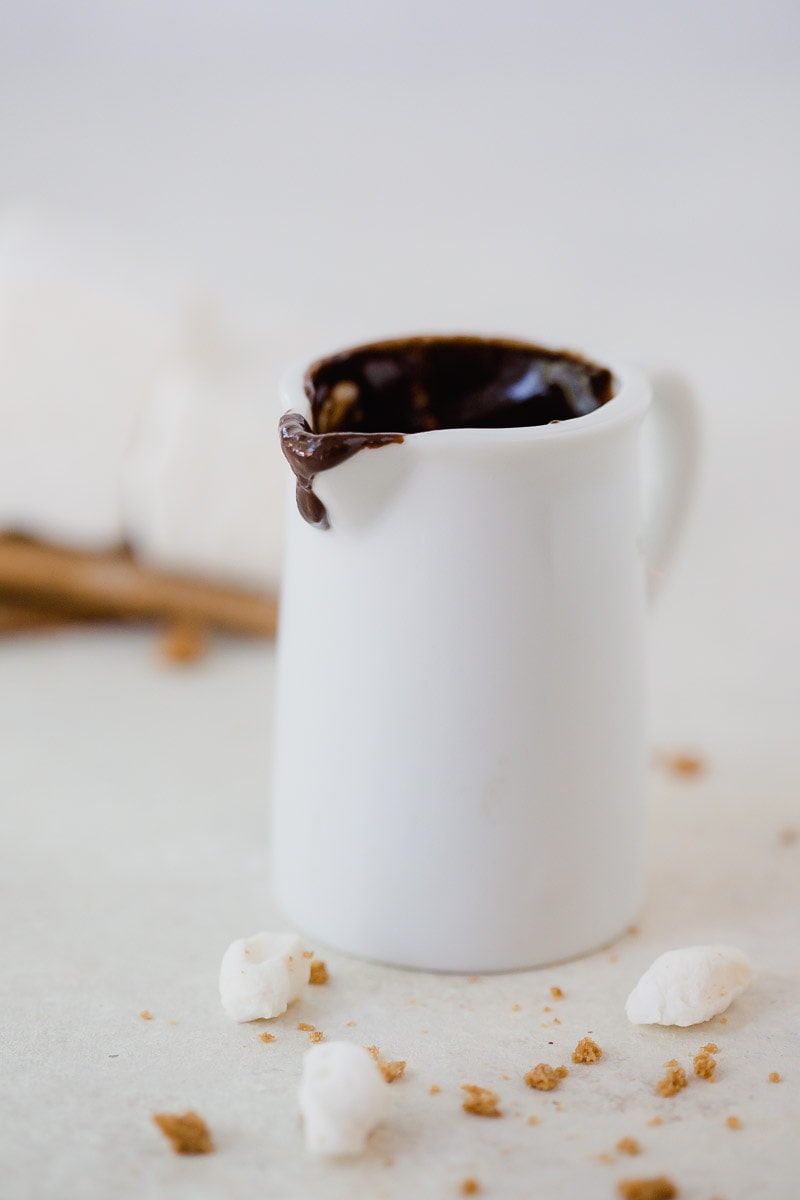 If you haven’t made my gluten-free Crunchy Graham Cracker recipe yet, you’re seriously missing out! We made them all quarantine and summer long, along with my Gluten-Free Marshmallows. For this S’ more Ice Cream recipe, I crumbled up the graham crackers and chopped my marshmallows into mini bites, then I swirled them in the ice cream with the smoky chocolate fudge. It makes for the most delicious combo, that truly tastes like your favorite days of summer in one bite. We have used store-bought marshmallows and gluten-free graham crackers for this too, and both worked great if you want to skip a few homemade steps! One tip though – just like for s’ mores, “stale” marshmallows work best. Especially if they’re homemade. Let them sit out, uncovered, for 4 to 5 days, until they’re dry and stretchy, rather than gooey. 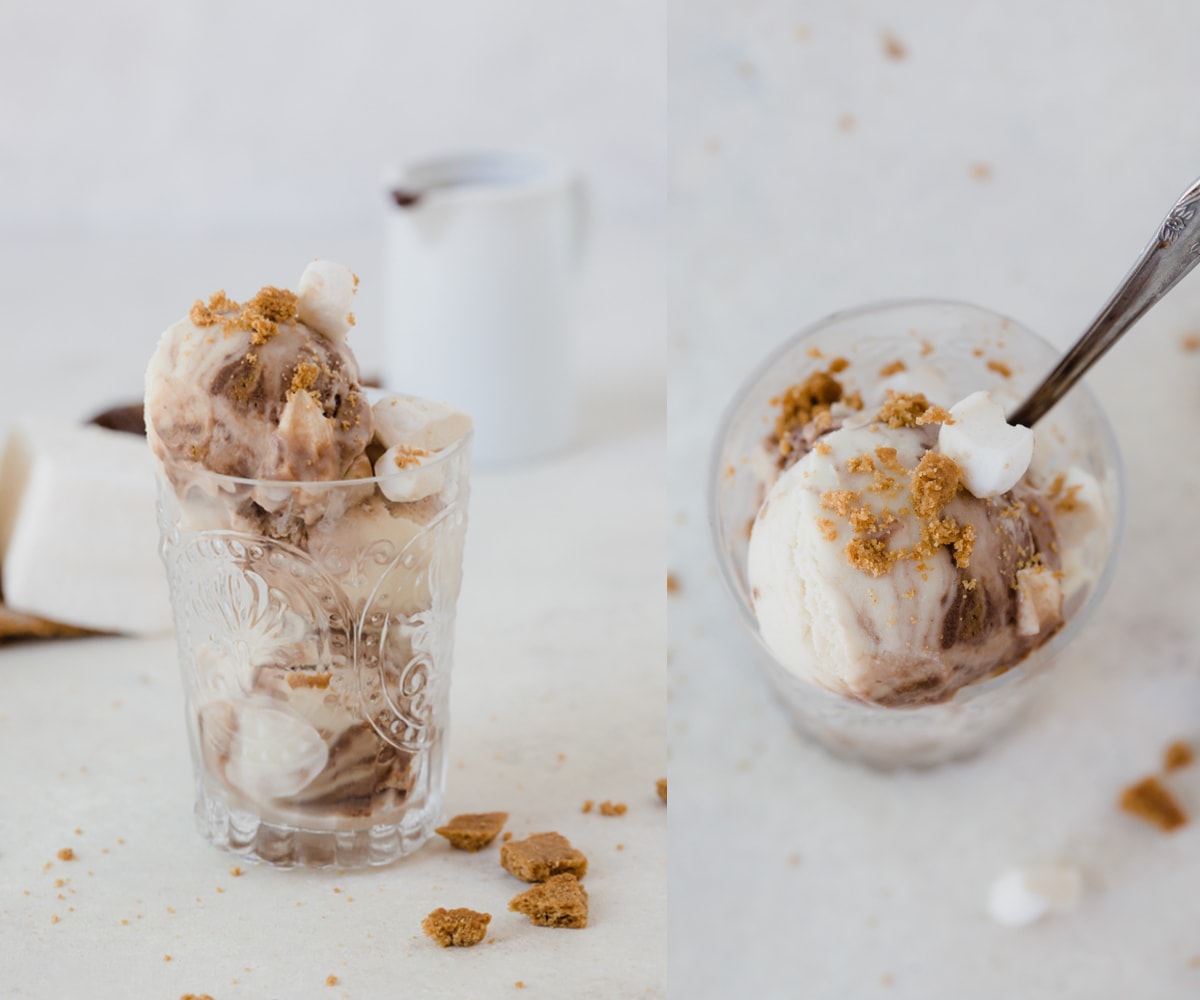 For this recipe, I went with my classic Dairy-Free Vanilla base rather than chocolate because I wanted it to be distinguished from my Rocky Road ice cream recipe. Plus, I wanted the flavors of the s’mores to really shine. But, if you are a double chocolate lover, feel free to use chocolate ice cream! This recipe tastes amazing on its own, but if you can tolerate some grains, I suggest you put it in your favorite gluten-free cone. You can even drizzle some of the extra smoky chocolate fudge on top. 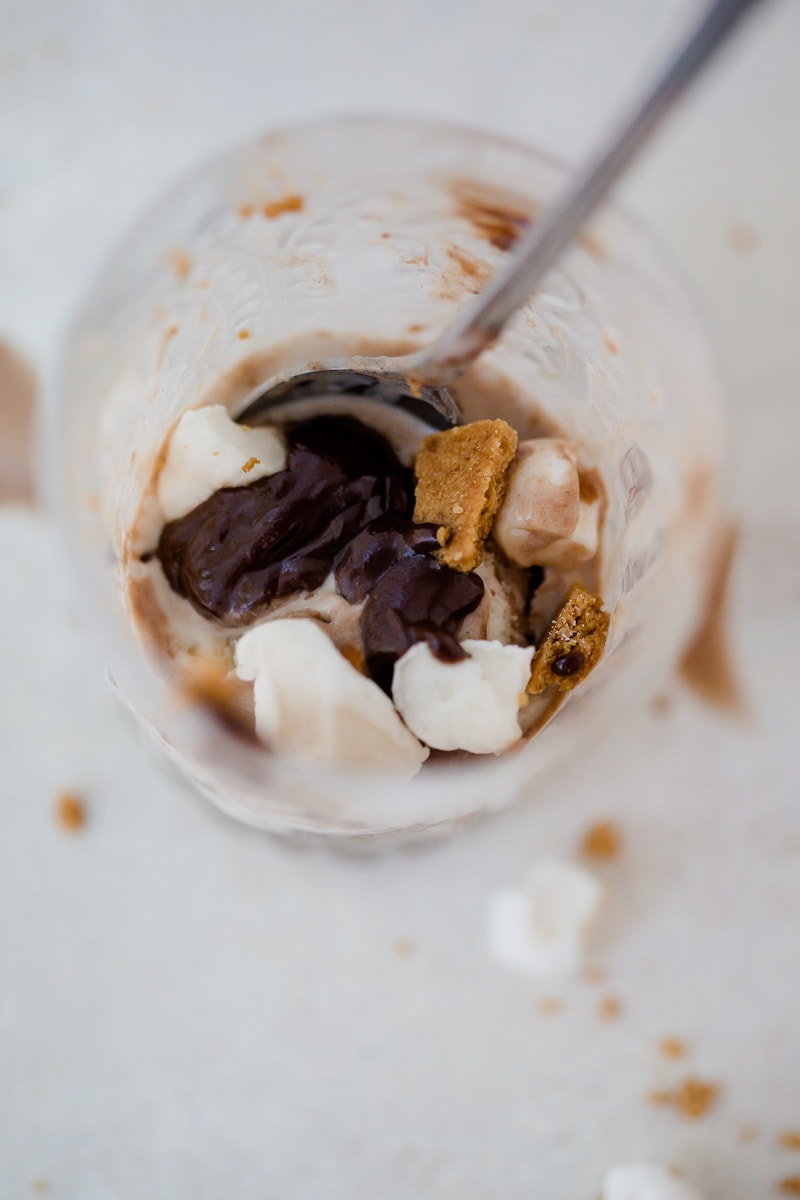 I hope that you enjoy making this recipe (and eating it) as much as our family did! If you are looking for more Ice Cream recipes I have plenty of options in all 4 of my cookbooks as well as here on the blog! 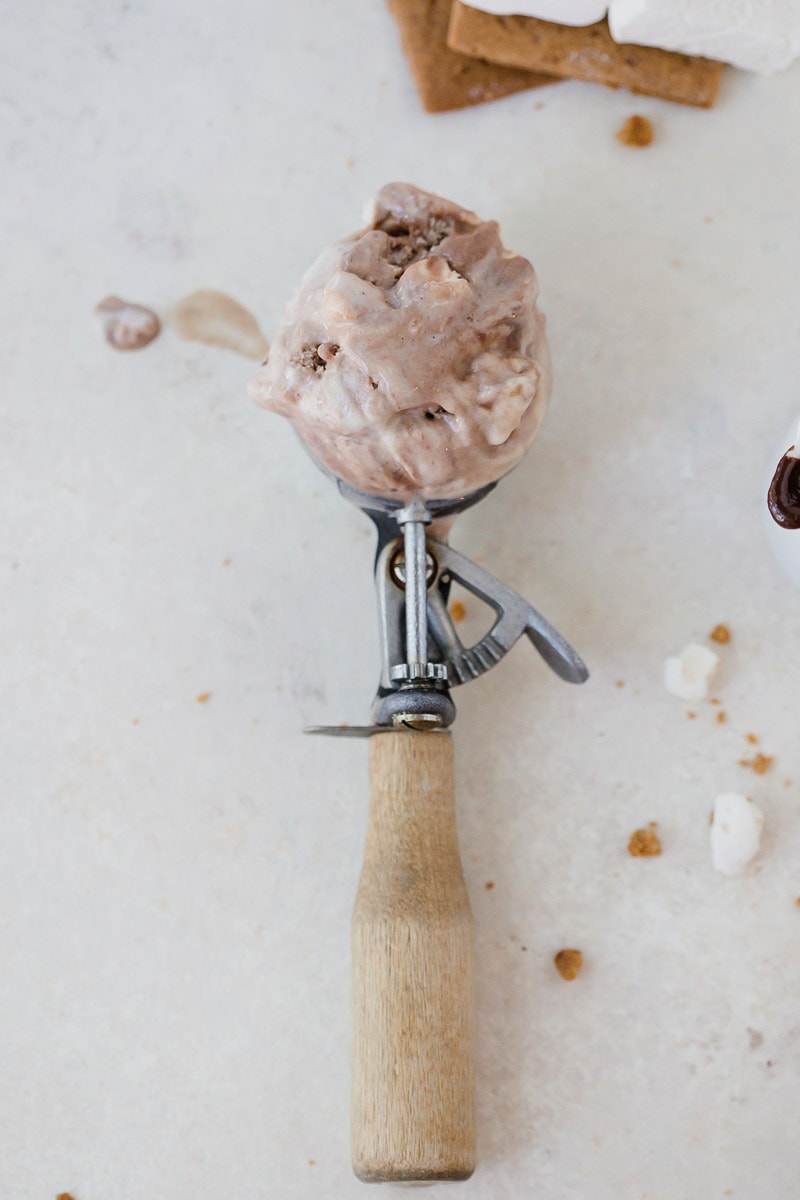 ** For dairy-free, substitute coconut oil for the ghee in the fudge and graham crackers

Did you enjoy this recipe? If you make this and love it, please post a photo on social media and use #daniellewalker and @daniellewalker so I can see it!