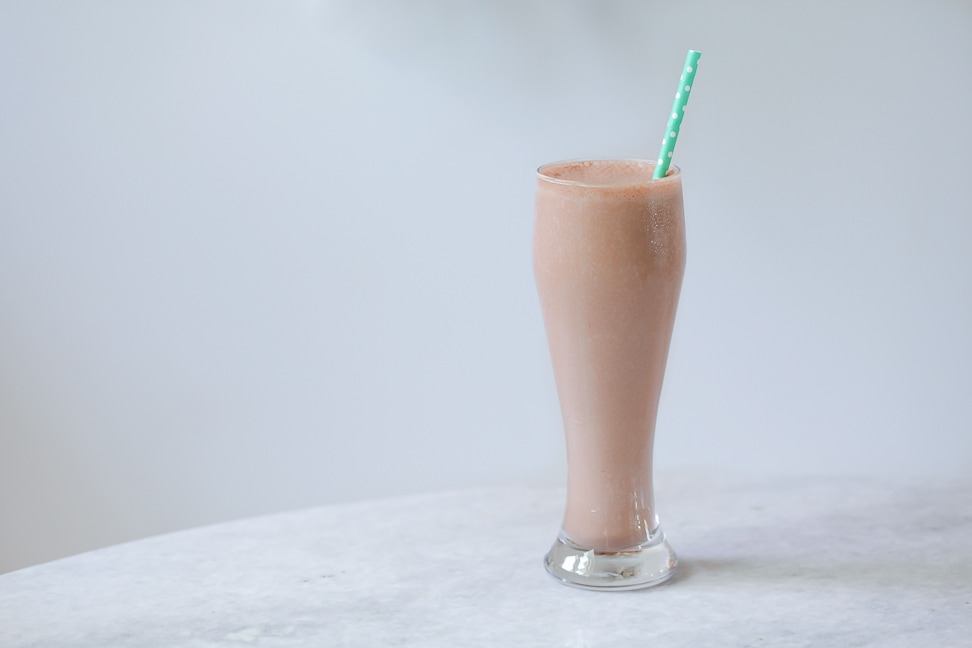 I'm happy to be back and working with my long-time partner Vital Proteins to bring you this new recipe for a chocolate paleo protein shake.

Before I tell you about the chocolate paleo protein shake, I want to thank you all for your prayers and thoughts. They were very welcome while I took time to rest and recover from my recent autoimmune disease flare up. It took a while, but I'm so happy to say that I'm back up on my feet. I have returned to my normal routine (with the exception of a scheduled nap daily while I still rebuild my strength!). I shared quite a bit on social media during this flare up, but didn't write anything in depth about it on the blog. You can read this old post from a couple of years ago though, as it was a fairly similar experience.

Every flare up for me is a little different in terms of what I can and can't tolerate food wise, but it's pretty consistent that I go through a period where I can't keep much down at all. When the disease has progressed to a certain point, I end up having a lot of nausea and I also end up afraid to eat anything with the fear that it will cause abdominal pain, so I mentally reject food. I have found that it can go downhill really quickly if I give into that mental wall and don't eat. I lose too much weight too quickly, and also get dehydrated and depleted on vital nutrients, so I usually try to find one thing that is semi-nutrient dense, and that goes down ok and won't exacerbate my UC symptoms. I eat only that for as long as it takes for the nausea to go away and then slowly reintroduce foods.

Usually I drink a lot of bone broth, but this time, the bone broth was not sitting well. I tried removing onions and garlic from the mix, but it didn't help, so I cut it and started drinking these paleo protein shakes instead. I think there was a week where I drank 6-8 a day! I was wary trying one the first day, wondering how my body would handle the nut-milk and cocoa powder. It didn't cause any symptoms so I latched on. I loved that every smoothie had 18 grams of protein and essential amino acids from the Vital Proteins Collagen Peptides. I also think my body loved all the potassium from the bananas too, as I usually end up deficient in that after a flare. I've been consuming these collagen peptides for years now. I'm not positive, but I also think this time around that they helped minimize the post flareup hair loss that I usually experience too! 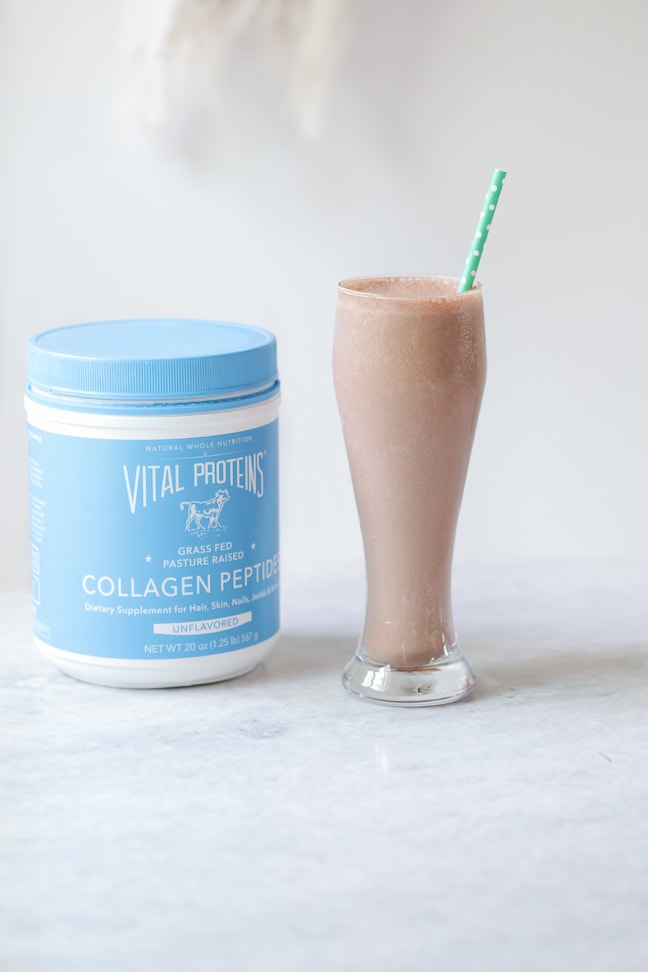 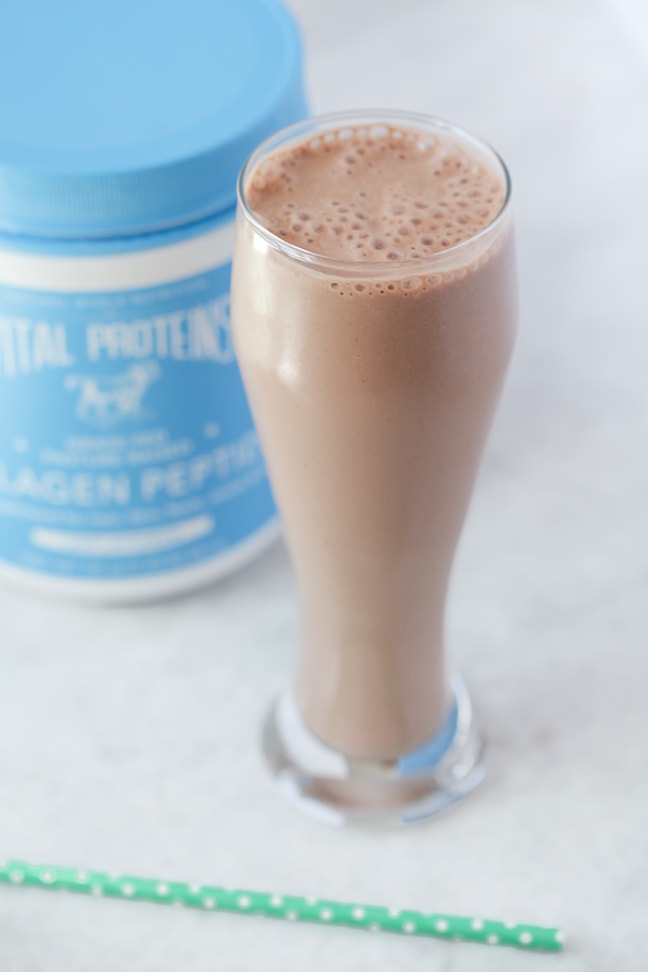 I was unable to tolerate sweeteners like honey and maple syrup during this recent flare, so if my bananas weren't very sweet I would occasionally add just a touch of 100% pure stevia powder extract to my shake. It doesn't take much – 1/8 teaspoon was more than enough. Unlike other sugar substitutes, Stevia is derived from a plant. Because Stevia has a negligible effect on blood glucose it is attractive to people on carbohydrate-controlled diets. I don't use it often in my recipes because I don't love the flavor for baked goods, but it works well in this shake.

Even now that I'm feeling a lot better, I've still been having one of these in the morning for breakfast. I'm limiting eggs and nightshades still, and also getting used to waking up early again (which is anything before 9am!). It's been great to have a filling quick breakfast I can make half-awake, while I'm trying to get the kids breakfast and Asher out the door. I have been adding a bit of avocado to it most days, and hope to be able to add a handful of raw spinach soon too!

Keep in mind that every body is different. What I can tolerate during a flare, could be different than what you can. I also used the chocolate paleo protein shake as a complete meal replacement, so keep that in mind as well! The ingredients are Whole30 friendly (just leave out the optional sweetener) if you're pregnant or nursing and want to add a smoothie to your snack repertoire. 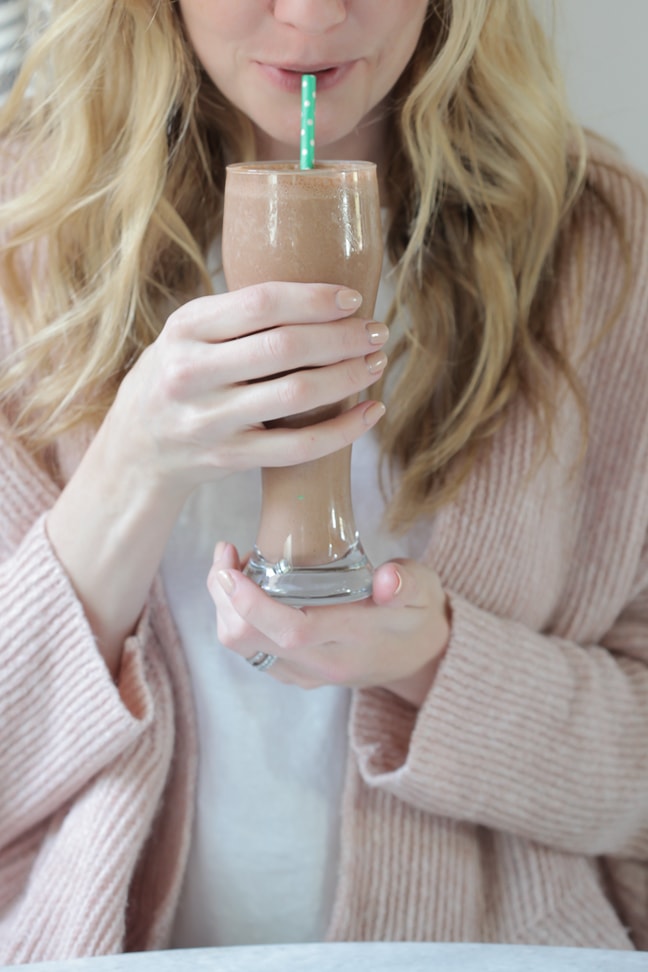